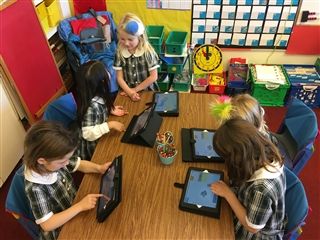 The Hamlin School is dedicated to teaching girls programming skills starting in Kindergarten. In Lower School, students are introduced to computational thinking using iPad apps such as Kodable, Scratch Jr, and Lightbot. They later experiment with block-based programming languages like Blockly and Scratch.


In Middle School, students continue learning with block-based programming environments as they create more complicated projects in Scratch. They also use other programming environments such as MakeCode and App Lab, which combine blocks of code with a more traditional coding language such as JavaScript. Our Grade 8 students learn to hand-code HTML and CSS to publish websites. 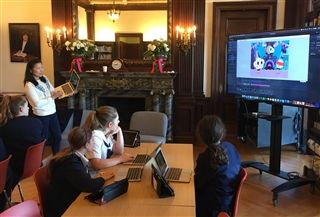 Through the use of these apps, students learn the basics of coding including sequencing, conditional statements, Booleans, and loops. As they create projects using these tools, students learn about the design process as they prototype, test, and refine their animations and games. Students also gain an understanding of important mathematical concepts such as coordinates, variables, and random numbers.

The Hamlin School educates girls to meet the challenges of their time and inspires them to become extraordinary thinkers and innovators, courageous leaders, and individuals of integrity.
© 2021 The Hamlin School